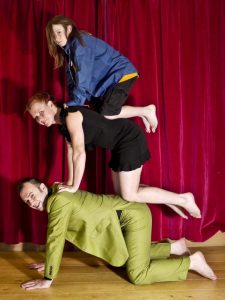 JustPlay was founded by Jo Galbraith & Jake Goode in 2014. It aims to build on the theatre for development projects the founders have previously completed as their theatre company Other Half Productions, under the umbrella of organisations including Children’s World International, Border Arts Project, the British Council, Serious Fun Committee & Cirque du Monde.

Jo & Jake are Visiting Lecturers at the National Centre for Circus Arts in London, where they have worked since 1990. They specialised in acrobatic balancing at the Centre National des Arts du Cirque in France

They have been members of Cardboard Citizens theatre company since 1992, where they have studied and practised Forum Theatre under Adrian Jackson, and trained with its founder Augusto Boal. They have acted in many plays, including co-productions with the Royal Shakespeare Company.

Some of the many benefits of this approach include:

Research on the effects of play suggests that it “facilitates communication, including enhancing self-expression; fosters emotional well-being, enabling stress management; enhances social relationships, strengthening attachment and promoting empathy; increases personal strengths, including the improvement of creative problem-solving and the capacity for resilience.”

“Play might be an indicator of health or resistance to stress. No matter how you slice it, seeing your child play is a good sign.” – Sandra Aamodt, Sam Wang

Successful projects have included delivering entertainment to culturally marginalised communities, teaching circus & theatre skills, and co-creating shows with disadvantaged people to highlight the issues that are important to them.

See details of interventions JustPlay has already achieved on the Projects page.

“Play is the highest form of research.” – Albert Einstein